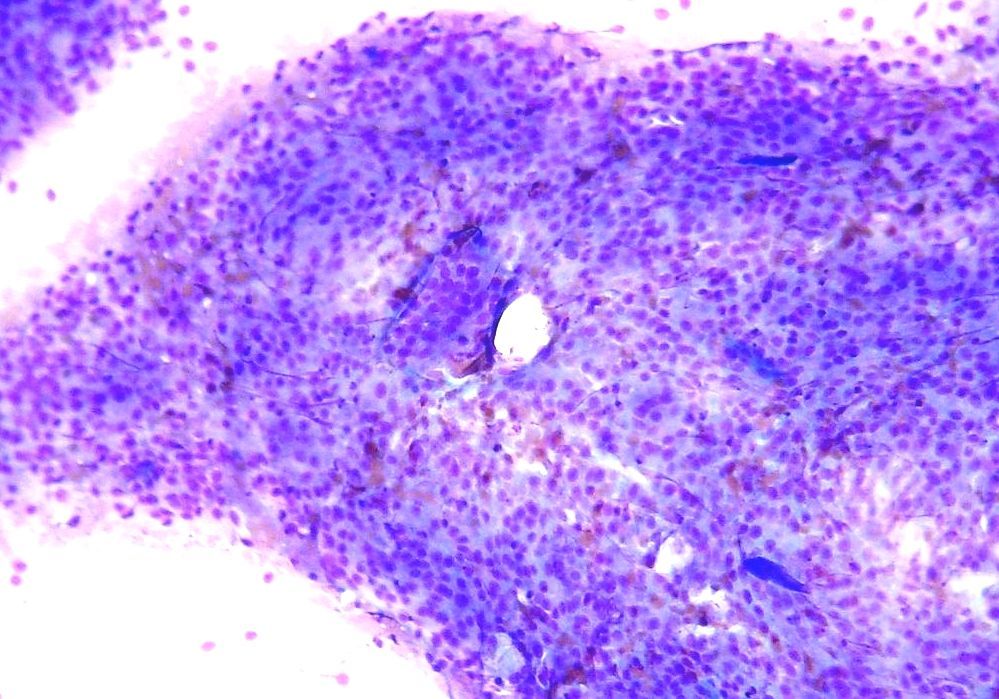 It can be challenging to determine whether the mass is malignant or not, so the needle biopsy is a useful diagnostic test. In some cases an incision and a full biopsy are needed to properly diagnose the mass.

Some veterinarians will also use imaging to look at the mass, such as X-rays or ultrasounds. The proper course of treatment is to surgically remove the tumor. The removal of the tumor and infected lymph nodes can prolong an animal's life.

If there is no significant contamination during surgery, antibiotics are not needed in the post-operative period.

In some cases, part of the rectal wall will need to be resected and reconstructed. The patient is placed in the standard perineal position. A rolled towel is placed under the caudal abdomen and the cranial quadriceps muscles are padded against the table to prevent trauma to the femoral nerves.

Surgery is approached with an incision directly over the palpable mass, and careful dissection is used to maintain the integrity of the tumor capsule. Maintaining the capsule is paramount to achieving local tumor control because wide resection in this area is not feasible due to the proximity of surrounding structures, including the rectal nerve, anus, rectum and sciatic nerve. If the tumor has adhered to the dermis or epidermis, it is possible and necessary to obtain a larger skin margin.

After excision is complete, new gloves and instruments are used for local lavage and closure of the surgical wound to minimize the potential of seeding local tissues with tumor cells. If possible, external skin sutures or staples are avoided as they tend to collect fecal material along the incision in the post-operative period.

In the case of gross lymphadenopathy on ultrasound exam or CT, extirpation of the nodes is strongly recommended, especially in the hypercalcemic patient. The medial iliac and hypogastric lymph nodes are located in the region of the distal vena cava and bifurcation of the aorta. With mild levels of lymphadenopathy, removal is straightforward; but as the degree of lymphadenopathy increases, surrounding structures including the distal aorta, ureters and iliac vessels can make removal more challenging.

Successful lymph node resection in this location is largely dependent on adequate exposure to the caudal peritoneal cavity and a thorough knowledge of the surrounding structures. The standard celiotomy incision will need to be extended caudally to the pelvic brim to allow for appropriate exposure to the region. Intra-operatively, it may be decided that the affected lymph nodes may not be resectable, and they are therefore biopsied prior to closure of the abdomen. Complications include infection, fecal incontinence and recurrence of local disease. All these are minimized by appropriately prepping and positioning the patient; handling the tissue gently; providing meticulous hemostasis but minimizing the use of electrosurgery or laser; avoiding the use of external sutures or staples; and obtaining tumor-free margins if possible.

Submit all removed tissues intact; if it is worth removing, it is worth submitting. In cases where surgery is not complete, radiation therapy to the primary tumor site and regional lymph nodes will improve local control.

Radiation therapy protocols range from 16 to 20 fractions on a Monday-through-Friday schedule. Acute side effects of radiation therapy can be moderate to severe and may result in colitis and rectal mucositis. During this period, an e-collar must be worn to prevent the dog from licking the area. In non-resectable tumors, hypofractionated radiation therapy has anecdotally been useful in palliation with a relatively high rate of response.

Side effects such as rectal stricture may occur with this type of protocol. The benefits of chemotherapy for this cancer are not well characterized; however, chemotherapy is often incorporated into treatment protocols.

The most commonly used chemotherapy agents include doxorubicin, carboplatin, mitoxantrone, melphalan and gemcitabine. NSAIDs are often utilized for putative anti-cancer effects. Median survival time was significantly shorter in dogs with sublumbar than in those without, and in dogs that underwent lymph node extirpation than in those that did not.

Disease-free interval was significantly associated with the presence of sublumbar LNs, LN extirpation, and administration of platinum-containing chemotherapeutic agents.

Interestingly, survival time and disease-free interval did not differ among groups when dogs were categorized on the basis of histopathologic margins complete versus marginal versus incomplete excision. In some cases, all three modalities surgery, chemotherapy, radiation therapy are used in the treatment of dogs with ASAGAC.

No standard of care currently exists for advanced, non-resectable or metastatic tumors. However, several retrospective studies provide some data to help guide clinicians. 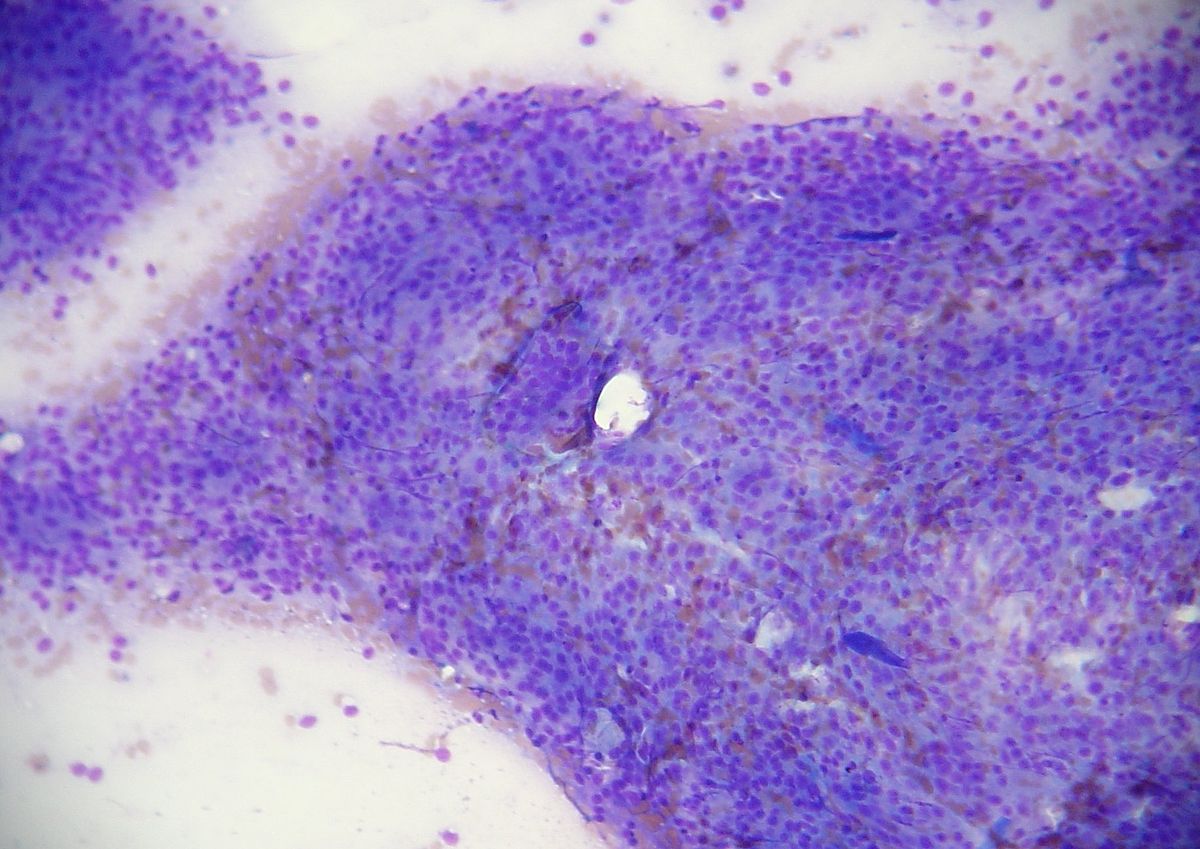 Surgery as well as RT led to relief of clinical signs. Humans with cancer commonly use physician-recommended or self-prescribed unconventional but complementary therapies in the form of herbs and nutritional supplements. The high prevalence of nutraceutical use among human cancer patients further suggests that nutraceutical use in pets with cancer is likely to be as frequent, if not moreso.

There is actually some good science behind the use of certain ocean-sourced natural ingredients, especially purified but not chemically-altered EPA and DHA sourced from fish and the naturally-isolated carbohydrate component of the New Zealand green-lipped mussel.

Cachexia weight loss in cancer patients, despite adequate nutrient intake,is a devastating consequence of malignancy in both human and veterinary patients. Alterations in resting energy expenditure and derangements in carbohydrate, protein and lipid metabolism have been documented in dogs prior to overt signs of cachexia.

These Omega-3 fatty acids are found in high levels in fish oils.

EPA is a potent anti-inflammatory mediator in the body, while DHA has its greatest impact in the brain and spinal cord. ALA, which is found in some seeds and plants and is marketed as a safe plant source of Omega-3s, requires the enzyme delta-6 desaturase to convert it into EPA and DHA in the body.

Unfortunately, humans, dogs and cats have limited ability dogs and humans to no ability cats to convert ALA to EPA and DHA. In general, the Omega-6 fatty acids, found in vegetable oils, corn oil, grapeseed oil, cottonseed oil, margarine, sesame oil, saturated fats and fast food products are pro-inflammatory. They keep the cells, tissues and body in a state of continued inflammation. The body needs inflammation to heal wounds and fight infection and cancer cells, but too much inflammation over time leads to many systemic health conditions and diseases in dogs and cats.

The body constantly strives to be in balance between inflammation and anti-inflammation, between Omega-6 and Omega Studies of polyunsaturated fatty acids PUFAsespecially the Omega-3 eicosapentaenoic EPA and docosahexaenoic DHA acids, have demonstrated prevention of carcinogen-induced tumors, the growth of solid tumors, and the occurrence of cachexia and metastatic disease in experimental tumor models. The proposed mechanisms in which these fatty acids elicit their effects may be related to the inhibition of cell proliferation and induction of apoptosis.

In contrast, PUFAs of the Omega-6 series appear to enhance tumor development and metastases and are considered to be inflammatory in the tissues of the body. There is also epidemiologic evidence of an inverse relation between dietary Omega-3 fatty acid intake and the incidence of some cancers.

Some tumor cells have difficulty using lipids as a fuel source, although host tissues continue to oxidize lipids for energy.

This finding led to the hypothesis that foods moderately high in certain fats may benefit animals with cancer, as compared with foods relatively high in carbohydrates. Pets in North America receive most of their nutrient intake from commercial dry pet foods.

In general, these foods are usually high in soluble carbohydrate and relatively low in fat. These characteristics may make some commercial kibble-based foods less optimal for the nutritional management of animals with cancer. High levels of EPA and DHA, as found in the triglyceride form of fish oil, are probably the most important nutraceutical to consider for animals with cancer.

Several human epidemiologic studies have suggested that consumption of the correct form, source and dose of EPA and DHA is a beneficial adjunct to treating many cancers. The recommendation for feeding high levels of EPA and DHA to pets with cancer is based on in vitro cell culture studies; studies in rodent models evaluating different types of cancer; clinical trials in human patients with solitary and metastatic forms of cancer; and clinical trials in dogs treated for lymphoma and carcinoma.

Several well-controlled clinical trials have evaluated the use of a fish oil-supplemented food in normal dogs and those undergoing chemotherapy for lymphoma, and in a study of dogs being treated for carcinoma. EPA and DHA supplementation were found to decrease or eliminate the metabolic alterations seen in dogs with stage IIIa and IVa lymphoma treated concurrently with doxorubicin chemotherapy, providing a significantly longer disease-free interval, longer survival times, and improved quality of life.

It is extremely important to note that specifically increasing the serum DHA content was associated with longer disease-free intervals and survival times in dogs with stage III lymphoma. This is key because only the triglyceride form of fish oil provides superior absorption, bioavailability and cell membrane saturation of DHA.

Another controlled and randomized clinical trial evaluated the effect of fish oil supplementation on the acute effects of radiation injury in dogs with nasal tumors. Dogs fed the supplemented food had higher serum concentrations of EPA and DHA compared with control dogs. 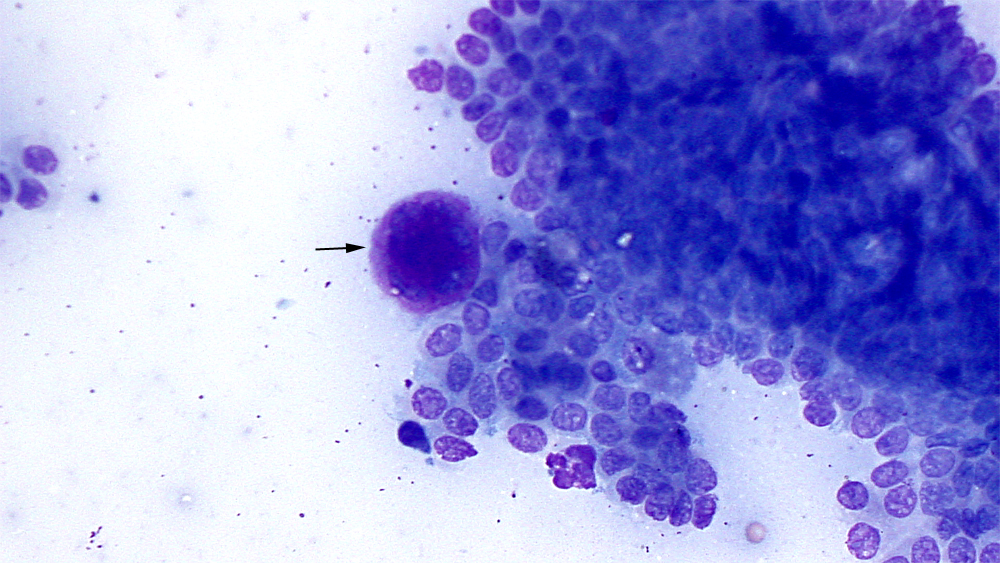 MMPs are a family of zinc-dependent enzymes that play a key role in degrading basement membrane components and extracellular matrix. MMPs are pro-inflammatory, tissue-destructive, and thought to be involved in chronic inflammation and some neoplastic conditions. MMP activity is detectable in canine and feline neoplastic tissue and in the serum of tumor-bearing animals.

MMP activity is higher in tumor tissue than in unaffected stromal tissue, indicating that MMPs may be involved in the pathogenesis of angiogenesis, tumor growth and metastasis. MMPs have been found to be significantly higher in naturally-developing malignant mammary gland tumors in dogs and most carcinomas compared with activities in normal tissues, and activities of tissue inhibitors of MMPs were lower in tumor tissue.

MMPs also play a significant role in the early and late inflammatory destruction of irradiated tissues. A study of dogs with osteosarcoma found that patients with activated levels of plasma MMPs had a significantly shorter survival time than dogs without.